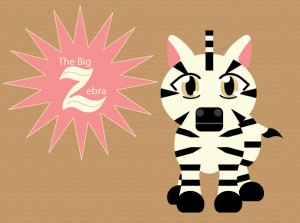 The Big Zebra is not that big of course, but I was trying to make a wallpaper with this one. The concept came from another project that involved kittens; which I will include later on in this blog. I used more or less the same face as the kitty badge with some minor adjustment. Right now I don’t have available the zebra reference I used at that moment since this was done a long time ago.

The star shape on the left was supposed to be a Ribbon. When I was working on it, I couldn’t find a good tutorial on ribbons and I didn’t like how it was turning out so I left only the star shape. I decided to keep the text inside the shape simple, though a did fool around with the letter Z for zebra using an Illustrator brush instead of a font.