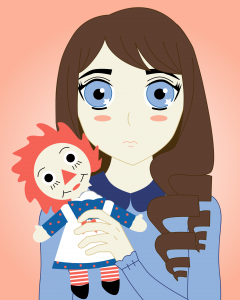 It’s been a long time since I’ve posted. I’ve been a bit busy this week, but well, I’ve decided to show you one of my new projects. What’s wrong with my Raggedy Ann?

Of course, as you can see I’ve continued with the manga features in order to make her look cute though I couldn’t avoid making her eyes look sad. Due to this I decide to add something broken in the picture. At the beginning I was inclined to add a stuff animal like a teddy bear, but I remembered the Raggedy Ann doll from when I was a child. It has been a long time since I’ve seen children with stuff dolls. Lately the majority of the dolls I see are made of plastic. For the Raggedy Ann doll a used the following reference and made a simplified version.

The girl has taken me a bit more time because I usually draw them with straight hair, which is easy, but I wanted to try something more difficult; in this case curly hair. I used the following reference for the hair and ended up only drawing one side in order to leave space for the doll.

I tried to find clothing that resembled the decade of twenties in which the books of Raggedy Ann apparently came out but found it a bit complicated to obtain a reference in which they were wearing daily clothes. The majority I found were for going out. So, I kinda of made a mixture for the blouse and colored it to match the eyes.