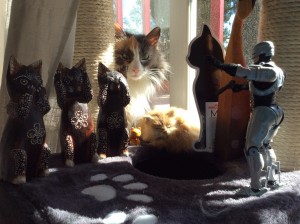 Here we have another of my art projects. Cat Scared Still Life was also done for an online class I took in which we were asked to take various objects and position them as we felt like. So, since I have so many cats around my house I decided that this was the best choice. The statement that I was going for with the cats was mostly their indifference towards violence as well as being too scared to do anything about it.

I don’t have cats with weapons. The truth is that the only inanimate object I have at home that has a weapon is this Robocop which I used to represent violence. I think I should have added some cat like ears to integrate him better 😉 .

Anyways, as you can see my cat popped up to see what was going on and got in the picture as well. She doesn’t count as still life, but she goes well with the rest of the cats. I’m sure if I would have left her alone for a while she would have created some caos. For the sake of this picture she’s become just another spectator of violence.