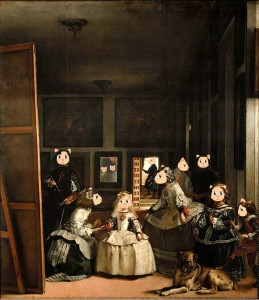 Las Mininas was done for an art project in which we were supposed to take Las Meninas of Velázquez and give it our own point of view. The title is not a misspelling by the way… minina/o  is a sweet way of saying cat in Spanish so it’s kinda done on purpose.

I think my versión was quite different from the other students. In my case as you can see I decided to give it a more feline look. The image of the cat was made in Illustrator and I modified the head of the same cat to fit all the characters of the painting. I was going to change the color of the cat images, but decided not to in the end since it seemed funnier using the same palette. I also had to use Photoshop in order to integrate the altered image and the original.

Las Mininas was a pretty easy project to do and I had a lot of fun doing it. I would like to see other interpretations of this painting. I might even consider trying to do another adaptation with a different painter and see how that comes out.

2 thoughts on “Las Mininas an Adaptation”