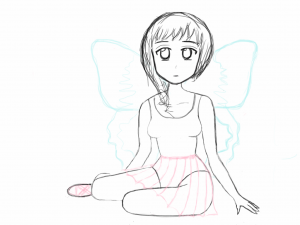 This sketch was done with an app for iPad called Sketchbook Pro using Adonit Jot Touch 4 stylus. Why use such a specific stylus? Basically, with my fingers I couldn’t draw precise lines and apparently this stylus is pretty good at that and I can at least see where I’m drawing. With others styluses that I’ve tried it was impossible to continue the line once I’ved lifted it from the tablet. Apart from that it is pressure sensitive so you can see in the drawing that some strokes look darker than others due to this.

This is another example of a manga drawing I’ve done. The character is supposed to be a fairy ballet manga girl. This time I actually tried to make this sketch with the typical proportions of a manga drawing that I learned from Mastering Manga by  Mark Crilley. I usually have a hard time finding how to draw books, probably because I’m always looking for something specific that I want to draw and I’m always complicating myself, but in this case this book has been really helpful. For someone who is starting out with manga this is a must have, since it has everything from head, body, hands, ect…

The body and eyes of this manga as I mention before I used as reference one of the characters found in Mastering Manga. She is wearing a bathing suit, though my intentions were to modify this into a tutu/ballerina dress. I added in the background some wings from a butterfly image I found through the internet to give it a fairy look. The hairstyle was suppose to be a braid, but it’s not quite finished. I hope to update this sketch later on.